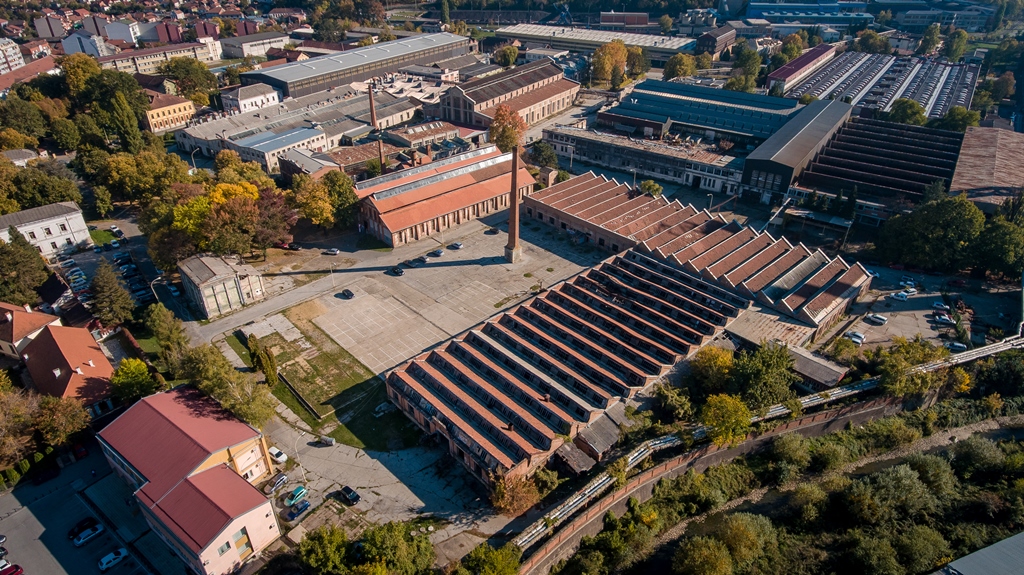 “Prince’s arsenal” is a military- industrial and architectural complex, unique in Serbia and in Europe. This sort of ambient unit consists of fabric building and workshops, from the late 19th century and early 20th century. In year 1979 it was declared a cultural good of great importance.
The biggest industrial company in 19th century Serbia, Topolivnica (foundry), was made of Old Arsenal of Milos and since then, the metal industry has been the foundation of industrial development of the city, and the city became the carrier of the industrial progress of Serbia. In the Military- technique institute, in “Caurice” object, shone the first electrical light bulb in Serbia and in the same year in Topolivnica the first electric machine began operating.
The industrial architecture, characteristic for the construction of Prince’s Arsenal, was taken from Germany and France. Its characteristics are red brick, wooden porches and staircases, broken tiled roofs and big chimneys, which make a harmonious whole. The main building is one-storey unit, symmetrical, with two-pieces windows, roof frieze and perforated trims made of alternating bricks below storey windows. From the both sides of the entrance, there is one cannon barrel on a concrete pedestal. It is considered that the engineer Todor Tosa Selakovic had the biggest influence on the construction of this complex.
The authenticity of the oldest Serbian industry is preserved in the immediate city core and it represents the ideal position for cultural, art and touristic conservation and valorization. A space valorized like that would be financially sustainable, recognizable city brand and an inseparable part of the city.
In Prince’s arsenal there’s a museum “Stara Livnica” which has specific exhibition of firearms and equipment from 19th and 20th century, refurbished or produced in firearms factory in Kragujevac.
In the last couple of years, Prince’s arsenal is particularly interesting for the employees in the film and music industry, and therefore, on this location, many music videos, as well as Serbian and foreign movies and series were filmed, like the movie of Italian- Irish coproduction, which shows the construction of what’s probably the most famous ship in history, the “Titanic”.